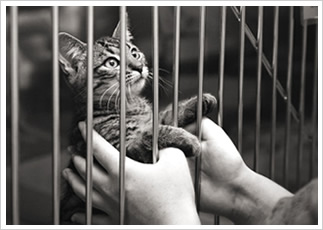 Welcome to the NAIA Shelter Project: A program dedicated to further reducing the number of adoptable pets that are euthanized in our shelters.

Pet keeping habits have changed dramatically over the last several decades. Public education and spay/neuter programs, widespread vaccination campaigns, permanent pet identification, the formation of dog and cat rescue groups, feral cat organizations and a host of other developments have combined with improved shelter practices and reasonable pet laws to drastically reduce pet euthanasia and create a better world for dogs and cats in the US. Practically every aspect of pet ownership has improved, from acquisition, to socialization and training, confinement practices and finally to lifelong pet owner commitments.

The NAIA shelter project has been created to track these advances and provide information about shelter issues to interested parties.

The centerpiece of this project is the collection and publication of shelter data. Specifically, we are gathering shelter statistics that show the number of dogs and cats impounded, returned to their owners, adopted out or euthanized.

We are doing this on a shelter by shelter basis, and hoping to eventually present overview information for entire cities, counties, metropolitan areas, states and regions. The data is collected on a yearly basis and graphed for viewing when a minimum of 5 years of data has been obtained. Shelter links that do not show graphs are shelters for which we have data, but not enough to graph. If your local shelters are not listed here, or listed but not graphed, please help us obtain the shelter data necessary to present a more complete picture and contact us at shelter_project@naiaonline.org.

Without accurate data we will never understand pet population trends well enough to define and solve the problems we face.

It is important to understand that there are inherent problems with shelter data - so much so - that for many years projects designed to collect and represent such data faltered. Some shelters don't have the resources to perform their basic jobs and track such data. Some shelters don't feel comfortable releasing information about pet euthanasia to the public because on its face it can be misunderstood and misused. Shelters, especially private humane societies that depend on public donations have often been unfairly criticized for euthanizing dogs and cats, even when they were performing euthanasia to prevent suffering, or to fulfill local animal control contracts and laws.

Complicating matters further, data may not be uniform. There may be input errors, incomplete years and a host of other problems. A few shelters distinguish between euthanasia requests made by owners when relinquishing a sick, old or aggressive pet and the euthanasia decisions made by shelter personnel based on lack of space and list them separately. Although there is a legitimate basis for distinguishing among such categories, wherever we have observed this, we have added the two categories together so that the total can be compared against similar shelter data sets where these numbers are combined. We gather and maintain this additional information, though, because it adds to our overall knowledge, even though we choose more uniform data for our graphs.

Even when data entry is accurate and meets our basic requirements, there are other complicating factors. Without additional data showing human population variations over time, shelter data may convey an incomplete or misleading picture. In areas where the human population is exploding, slight increases in the number of pets impounded and euthanized may still reflect an overall decline in the number of pets euthanized per 1000 people, which shelter data alone will not show. To see shelter data in relation to human populations, be sure to scroll to the bottom of the list on the menu on the left.

No matter how good the data is, it's still difficult to make meaningful apples to apples comparisons between shelters. Different parts of the country suffer from different kinds of problems that need to be taken into account. In areas where winters are especially harsh or coyotes and other predators are plentiful, feral cats may not pose a shelter problem. In inner city environments though, where predators are few and the climate is mild, such as Southern California, feral cats may pose an enormous challenge to animal control's resources. In areas where terrestrial rabies exists, like in parts of the Northeastern US, stray animals may pose additional public health concerns.

The bottom line is this: We have decided that gathering and providing the available data, such as it is, is better than providing no data due to its lack of uniformity or inherent weaknesses. We hope that you will find this resource useful, utilize it wisely, recognize its limitations and contribute to our growing shelter data base so that it will become more useful over time.

In most cases individual shelters are the source of data. In some cases, the data comes from state mandated programs which are controlled by public health or agriculture departments. In a few other cases, we've used data supplied by animal welfare coalitions, which are in the public domain.

For assistance, or to contribute shelter data, recommend additional resources for our resource page or just to share helpful ideas, please contact us at shelter_project@naiaonline.org. We look forward to working with you.